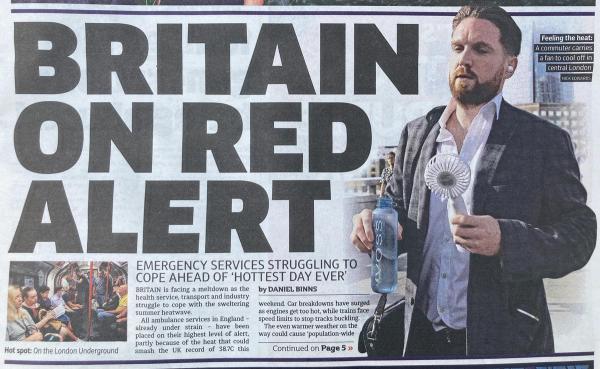 “The surface temperature in an urban green space may be 15-20°C lower than that of the surrounding streets, and the air temperature 2-8°C cooler.” So said the House of Commons Environmental Audit Committee's 2018 report on the UK’s heatwave preparedness.

This is the Heat Island effect in action. Towns and cities are hotter than the countryside, especially at night, with London the most affected.

Paved front gardens make things worse during heatwaves, both for those who have them and the surrounding neighbourhood. Adding in all the other problems that are hitting us as climate change kicks in, paved front gardens are really a bad idea.

Yet people are still busily paving and concreting, often making already-paved areas even larger and obliterating any remaining plants. How did we get here?

About 20 years ago people started covering their entire front gardens with red brick surfaces. Until then, crazy paving, concrete and large slabs were used for parking, together with a hedge and a border for plants. But then came contractors, incentivised by awards from suppliers, promoting a total look. Covering the entire area with red bricks was a good-looking and low maintenance solution to parking all the household’s cars.

In reality, they were never that easy to maintain. People resort to regular power-hosing, scouring, re-sanding and weedkillers to keep them looking acceptable. All environmentally-unfriendly methods which use a lot of water, energy and materials and put toxic chemicals into the rainwater drains.

Now, 20 years on, many of these bricked surfaces have become uneven and discoloured, and plants and moss have taken up residence in the cracks.

So the repaving cycle begins again. Contractors, again with an eye to awards from the paving companies, are seizing the opportunity to offer replacements. It’s the same good-looking, easy-to-maintain gambit, but now the popular choice is grey – bricks or block paving. A further inducement to paving the entire front garden is to create space for all the household’s electric vehicles to charge overnight.

In reality, these new surfaces are even less easy to maintain. That’s partly because, since 2008 (after extensive flooding in many parts of England), regulations say they have to be either permeable or have drainage, to stop rain running off and causing flooding. In practice, this usually means laying the pavers and bricks with small gaps between them, or sealing the surface and putting in drainage channels.

But if there are gaps, those pesky plants and moss quickly establish, despite weed-suppressing membranes underneath. Seeds arrive from above, and membranes don’t last long, especially if often driven over. In time sealed surfaces crack, giving plants more opportunity to get going. And drainage channels quickly become blocked with leaves, other debris, soil and (yet more) plants, so become functionally ineffective.

De-paving, not repaving, is the answer

Paving and repaving front gardens makes heatwaves and flooding worse, is damaging in many other ways (see It's Not Just Flooding) and sets up an ongoing maintenance battle with nature.

On all counts, it’s much better to de-pave. This means removing existing hard surfacing except for the path and where the tyres of parked vehicles are, exposing the soil and allowing plants to grow.

In 2017, in a joint project with the Royal Horticultural Society, we transformed a brick-covered front garden into a green one, still with parking – see A Real Life Restoration.

But taking up bricks and paving is not difficult. It can be done little by little. It’s transformative in that it immediately looks as though it’s intended rather than neglected.

The exposed soil doesn’t have to be ‘gardened’. Many plants will arrive of their own accord – the ultimate in low-maintenance. Any undesirables can be quickly pulled out. Or sprinkle a packet of mixed annuals – some will establish and come back again and again. For a more ‘gardened’ look, the RHS website has lots of ideas.

Research shows that passers-by appreciate and are interested in plants in front gardens.

De-paving front gardens solves so many problems and is an all-round benefit to householders, their neighbourhood and the wider environment.

July 2022’s dangerous heatwave is yet another wake-up call to take de-paving seriously.