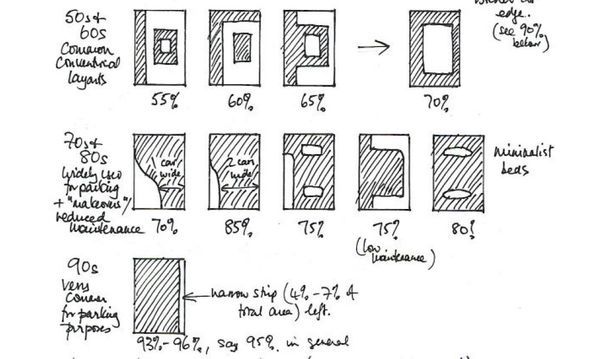 Since the late 1990s Ealing’s Local Agenda 21 became increasingly concerned that paving and concreting front gardens was causing many environmental and community problems.

The group therefore decided to conduct the first ever survey of the extent of hard surfacing of front gardens.

In 2005 over 60 volunteers, many motivated by concern about front gardens disappearing, surveyed 7,675 front gardens of private dwellings in a random sample of 167 (10%) of roads in the London Borough of Ealing.

For each garden, the extent and nature of the hard surfacing and its use was recorded by volunteers from the pavement. This data was matched with GIS data on the garden's area, to calculate the area under hard surfacing. Results were grossed up, on a ward by ward basis, to the estimated total number of front gardens in the borough. The survey covered the front garden area only; driveways are not included.

The Full Report On This Survey Can Be Downloaded Here (PDF, 633 KB)​ ​

The key statistics from the survey can be viewed over here.

How it was done

The survey was supported by a grant of £1,900 from Ealing Council's 2003-4 Main Fund to Voluntary Organisations. This was used for printing and mailing survey forms and for data entry and processing by a specialist company. A £400 grant from Ealing Community Network supported some of the GIS extracting. Everything else was done for free, by volunteers, in their spare time.

What is Local Agenda 21?

At the Rio Earth Summit in 1992, world leaders agreed on Agenda 21, a plan of action to tackle the major threats to the earth and improve people's quality of life. Local Agenda 21 is the process of building sustainable partnerships between local authorities and communities to help develop and implement local policies and plans for sustainable development.