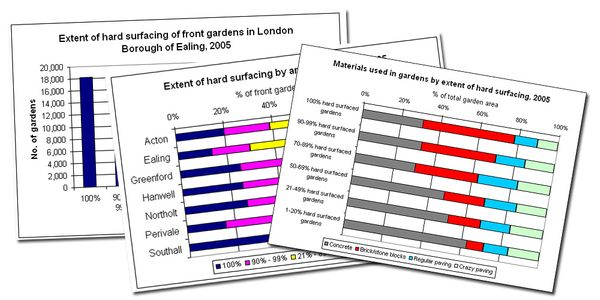 Nearly two-thirds - 64% or 1,961,000m2 - of the total front garden area is covered with hard surfacing of some kind. This is 3.5% of the total geographical area of the borough, and nearly one and a half times the size of Hyde Park in central London.

The average front garden is 68% hard surfaced. But as the chart shows, this average hides a wide range.

The hard surfacing materials most often found in the borough's front gardens are concrete, bricks or stone blocks, and various types of paving. Concrete is the most widespread material, but in terms of square meterage, there is more brick/stone block surfacing than concrete (see chart).

Brick or stone block surfacing has only become popular fairly recently. This suggests that there is a trend towards hard surfacing more of the front garden area than in the past.

Gardens Being Used for Parking

But Not All Hard Surfacing is for Parking

Many people assume that parking is the reason why front gardens are extensively hard surfaced. However, this is not necessarily the case. 32,800 front gardens in the borough are completely or nearly completely (90+%) hard surfaced, but only 19,900 of these are likely to be being used for parking, leaving 12,600 - well over a third of them - which are not. This is not entirely explained by size of garden:

Ealing is the third largest London Borough. As well as Ealing, it includes Southall, Acton, Greenford, Hanwell, Northolt and Perivale. At the 2001 Census there were over 300,000 residents in 118,000 households and with over 140,000 cars/vans. Housing is a mix of Victorian, Edwardian, 1920s/30s and more recent development as the borough expanded westwards, following the railways. Many houses have small front gardens without garages and driveways.