We need hedges! But what sort? 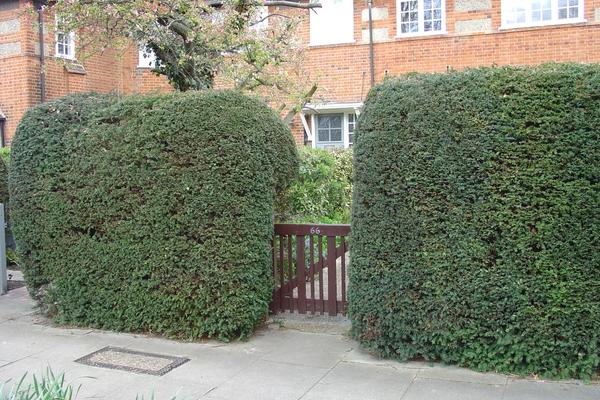 Hedges are often the first casualty when front gardens are paved for parking.

That’s a huge loss because hedges boost urban life in many ways, and we need more, not fewer, hedges, especially on residential streets.

Research shows that hedges do so much to make towns and cities more liveable. They help absorb some air pollution. They help moderate temperatures in towns – a rising problem as towns tend to be hotter than rural areas, and excess heat is increasingly implicated in public health problems and even higher death rates.

What’s more, hedges provide shelter and food for insects and birds (supporting urban nature), help with security and privacy, and contribute to a green, aesthetically pleasing and stress-relieving environment.

Some London boroughs have begun putting in hedges a lot – beside roads and schools, in new developments and new road layouts, beside paths. This is because they are now known to provide many of the same benefits as large trees and parks, but take up less space and can be fitted into all sorts of small spaces and corners.

Exactly the same applies to front gardens, so it’s much better to keep existing hedges and plant new ones than to replace them with walls and fences.

Not all hedges are the same

Some types of hedging plants are more beneficial than others.

Researchers from the Royal Horticultural Society and the Universities of Reading and Sheffield have been investigating which hedge plant species used in towns and cities deliver the most benefits. They have assessed the available research and published a review of common urban hedge species by their benefits (as currently understood).

Nearly all hedge species provide some benefits, but some are particularly strong.

Air quality: Particularly good at absorbing air pollution are beech, yew, bay laurel, privet, Elaeagnus and Photinia. Hairy and narrow leaves are good at trapping particulate air pollution (tiny sooty particles). Some of these can also produce allergenic pollen when they flower, which can be a problem – seasonal pruning can help lessen this.

Wildlife: Many hedge plants support wildlife by providing shelter, nest sites, food such as nectar for bees and other pollinating insects and autumn berries for birds, and corridors for movement. A mixed hedge of several different species helps maximise biodiversity.

Flooding: Because so many front gardens have been paved over to lower maintenance needs or provide parking, former gardens have few or no plants, adding to rising flood risk.

Hedges can help reduce this by intercepting and delaying rain reaching the ground, and taking up and transpiring water, readying the soil to absorb the next lot of rain. There’s not much information about the best species because most of the relevant research is on trees and not heavily-pruned hedges, but Forsythia is one species known to have a high transpiration rate.

I’ve compiled the following list of hedge species from the published review. This, together with information about preferred growing conditions from plant suppliers or the RHS (https://www.rhs.org.uk/plants) may be useful if you’re planting a hedge or with re-appreciating and maintaining an existing one.