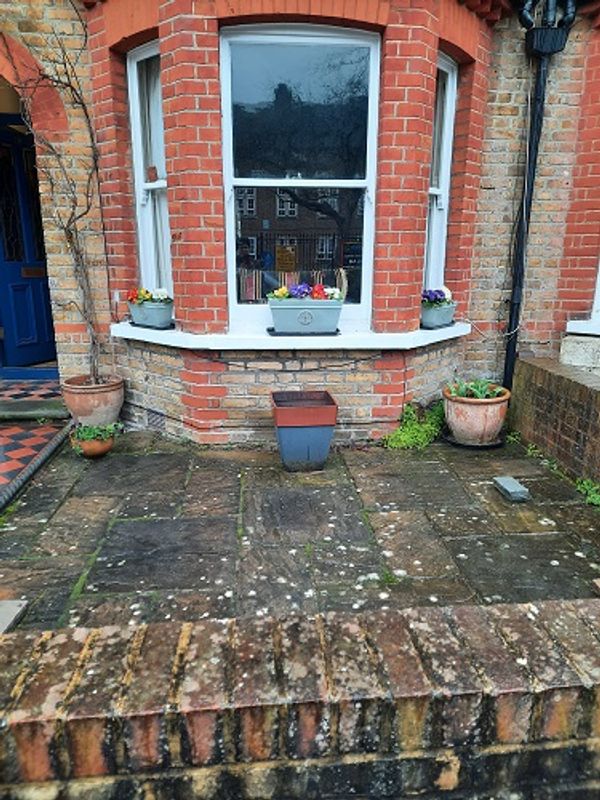 Nancy writes: "In the early months of the pandemic during the daily trudge around the neighbourhood, passing front gardens we noticed just how depressing, dull and sterile many were – just like ours! Tired paving or pebbles, bins, discarded household stuff, bikes, weary dried-up hedges, half-dead shrubs…...nothing really colourful to lift our lockdown spirits and of course to soak up rainfall.

I decided to put my long term ambition into effect – to transform the blameless but boring paved front to our Victorian red brick terraced cottage into a flower-filled front garden. Something for us and passers-by to really enjoy.

I contacted a young local landscaper who took up a central rectangle of the paving I had had laid 20 years before , excavated it and filled it with soil. We decided to leave some paving to make it easier to tend the new garden. He added a brick border. We dug in more topsoil and manure. Then the fun part…...shopping for flowering plants.

Local garden centres had a great choice and we chose small red and pink rose bushes, blue Polemoniums (“Jacob’s Ladder”), Lavender provencal, Calibrachoa, Sweet William – all surrounded by a border of beautiful Dianthus in various shades of pink. I also added some plants I had grown from seed, like Cosmos.

Bees and other insects love the garden and it’s such a pleasure to watch them fussing around the flowers. Neighbours and passers-by have stopped to say nice things about this new addition to the street.

I was worried about foxes digging it all up but so far we've had only the odd minor excavation. I have scattered pellets 'soaked in the real essence of lion dung' available at the garden centre. So far it certainly seems to have helped!

I would certainly urge anyone with a paved-over front garden to think again, about insects and the climate and just putting a smile on all our faces. It is a wonderful easy project which we think revitalises and makes a fantastic contribution to the street scene."