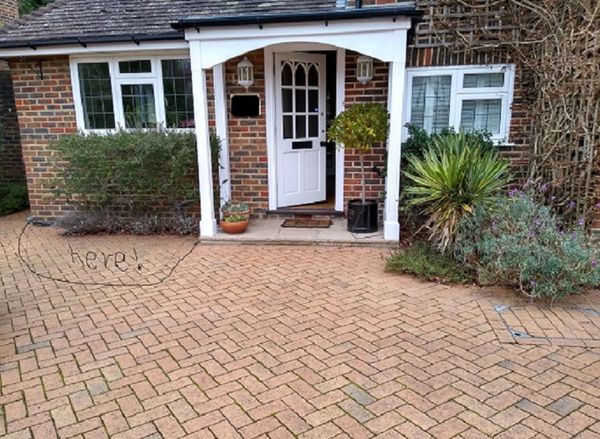 Fiona writes: When we moved into our current house, we inherited a front garden that was attractively planted around the edges but largely covered in brick paving. We wanted to take up some of the paving to make it more wildlife-friendly. However, it wasn’t straightforward as we have a carriage driveway arrangement, i.e. two entrances. Furthermore there was a solid concrete driveway underneath one side, laid when the house was originally built.

Undeterred, we identified a section beneath our kitchen window where the existing narrow bed could be extended out into a semi-circle, matching the shape on the other side of the porch.

It was surprising how much material had to be removed first, but the unwanted bricks were eagerly taken away by someone building a pond in their garden - another environmentally-sound move - while a builder was happy to take away most of the hard core.

Our planting scheme started with an extension to the existing Ceanothus hedge, already beloved by insects. We have since added a rose, an ox-eye daisy, an Echinacea, an Osteospermum, a flowering Hebe, a Geranium, a Dianthus and a curry plant. Tulip bulbs are next on the list.

We’re delighted with the results so far, and an added bonus is that a robin now seems to have adopted our front garden!