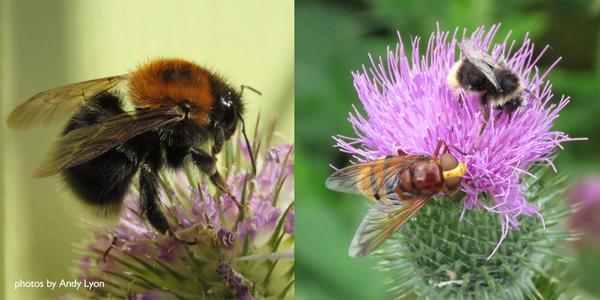 Just as we need three nutritious meals a day, pollinating insects need constant supplies of food in the form of the nectar and pollen produced by flowers.

The importance of gardens has been underlined by recent research into the role gardens play in supporting pollinators.

Researchers at the University of Bristol looked at how much nectar is produced by the flowers found in three broad land types in the UK: urban areas (towns and cities), farmland and nature reserves. They found that towns and cities produce just as much nectar sugar as the others.

What’s more, urban gardens are by far the most important source of nectar for pollinators. Even the researchers were surprised at how much gardens contribute – a massive 85 percent of total urban nectar production:

That is mainly because gardens contain lots of flowers and a wide variety of different types – including non-native species which often produce large amounts of nectar.

That variety means there’s usually something in flower at most times of year, therefore at least some nectar or pollen available for every type of pollinator to access.

Front gardens may only account for a quarter of the total private garden area in Greater London, yet for nectar production, front gardens are just as important as back gardens.

Pollinating insects are looking for a whole host of flowers which are “on show”. Some plants may have masses of flowers at the righttimes, such as Ceanothus and Berberis.

It will depend on the time of year. But, unlike back gardens, they don’t usually have lawns which, if kept close mown, produce virtually no nectar and make back gardens less useful overall to pollinators.

The garden plants producing the most nectar are often shrubs. Top of the list are Fuchsias and Hebes. Also high up are Skimmia japonica, Lavender, Brachyglottis, Berberis, Ceanothus, Ribes (flowering currant) – but also Dandelion, Crocosmia and many more.

Many of these are suitable for front gardens – including the much-maligned Dandelion. Leaving them to flower and produce plentiful nectar has to be better than trying to eradicate it with toxic chemicals, and snapping off the spent flower heads will stop it seeding madly.

Doing this will benefit us all. For more advice on simple actions you can take see: