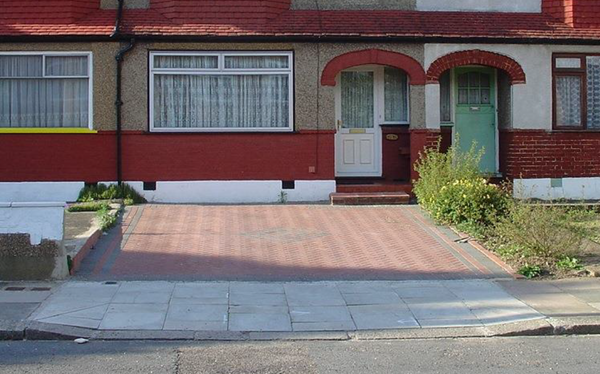 What happens to front gardens when pavement crossovers are approved?

The short answer is – nearly all of them get paved over! The domino effect.

In late 2017, we surveyed the front gardens of 403 residences where pavement crossovers had been approved by Ealing Council between 1 April 2015 and 31 March 2017, under permitted development regulations.

We already knew from our 2005 research (here) that parking is the main reason for hard surfacing a front garden, but we believe this survey is the first to show that permitting parking almost always results in the front garden disappearing under extensive hard surfacing.

As far as could be ascertained, in most cases the hard surfacing was new, so was put down to allow parking. The vast majority of the new crossovers were for the original property. Only a very small number were for new builds and redevelopments such as conversions to flats (so probably occupied by more people than originally). The most frequently-used material was brick, followed by stone blocks, concrete and gravel/loose stones.

In at least a quarter of the front gardens the legality of the surfacing was questionable. The 2008 regulations (see our Legislation page) state that front garden hard surfacing of more than five square metres must either be of porous material or, if impermeable, must make provision for run-off. Yet we found over a quarter had no obvious run-off provision despite apparently impermeable surfacing. A further ten percent had drainage grilles either ineffectively positioned or not running the full length of the hard surfaced area.

It’s fanciful to expect local authorities to enforce these regulations. Ealing Council, like all English local authorities, is being required to do much more with less, and the borough’s front gardens are hardly likely to be high on its agenda.